There is a tale about the ancient Castrum Rubini, now Rovinj, connected with the Istrian Atlantis – a peninsula called Cissa.  The legend says that on St.Euphemia`s day, September 16th 304, the peninsula was struck by a terrible underwater earthquake and the sea covered its streets, squares, houses and palaces. The peninsula was divided into new islands which lie in front of today`s town and its inhabitants (famous for producing colors) founded the picturesque Rovinj.

Owing the legacy of the rich history and particular location ,Rovinj is one of the most attractive and most beautiful towns on the Mediterranean. The city radiates with a unique beauty which attracts visitors from all over the world. Rovinj has charming stone paved streets, overshadowed by old, closely built, houses with particular architectonic touches and roof terraces, renaissance town walls, beautiful churches, galleries under the clear sky, many restaurants offering seafood whose fresh scent pervades every corner of the town, a view on endless blue embellished with 22 islands, each with its particular attraction. All of this represents Rovinj as an inevitable pearl to meet, feel and always return to it.

The town walls and gates – By the 7th century AD, Rovinj was already surrounded by town walls, and later strengthened by the construction of towers. The old town had seven gates, while three still exist today: the Saint Benedict Gate, the Portico and the Holy Cross Gate. A baroque archway called “Balbijev luk”, which today serves as the entrance into the old town, was built on the site of the former outer gate in the 17th century.

The church of Saint Euphemia – is a most imposing structure, which bears the name of the patron saint of the town. It dominates the whole old town centre. It was built in the 18th century, while its façade in Venetian-baroque style was added in the middle of the last century. At the top of the sixty-meter-high bell tower stands the copper statue of St. Euphemia, which shows the direction of the wind by turning around its axis.

The Franciscan Monastery – the monastery and the church were built at the beginning of the 18th century. This interesting building, created entirely in the Baroque style, contains a rich library and a fascinating museum of sacral artifacts.

The castle on the island of St. Andrija – a Benedictine Monastery established in the 6th century AD. In the 15th century, the Franciscan order added extensions and it was again refurbished at the end of the 19th century by Baron Hutterodt.

The baptismal font of the Holy Spirit – constructed in a heptagonal shape , it stands as the oldest relic situated in the Lokva Square. The 13th century Romanesque church which houses the font is also interesting because of the detailed carvings of the transenna depicting scenes of Golgotha.

The Rovinj town museum – located in a Baroque building in the town centre, it containes an exhibition of modern art as well as various permanent collections.

The Rovinj aquarium – in this, over a 100 years old, institution, visitors can admire all the wealth of the colorful underwater world of the Adriatic seabed.

The Limska draga fjord – This flooded karstic canyon, which has been declared “a special maritime reserve” and “an area of outstanding natural beauty”, is a testimony to the climate changes and geological evolution of Istria. With its emerald green sea and diverse vegetation, this is one of the most beautiful fjords on the Adriatic coast. Romuald’s cave is situated here.

Dvigrad – Dvigrad is a medieval town abandoned in the 17th century, and only its ruins remain, of which the most impressive ones are those of the church of St. Sofia. Dvigrad is situated 23 kilometres from Rovinj.

The Palud marsh and the Dvije Sestrice islands – The Palud marsh is a “special ornithological reserve.” Its brackish water and lush vegetation attract many bird species, either for nesting or as a stop-over on the way to other destinations. The Dvije Sestrice (Two Sisters) islands are a nesting site for seagulls. Because of its thick holm oak forest, the Gustinja cape is regarded as “a forest vegetation reserve.”

The Fantasy Quarry – This is a geological spectacle famous all around the world. It is a unique example of the geological changes connected with karst, of its structure and of the forces that created this abandoned quarry. 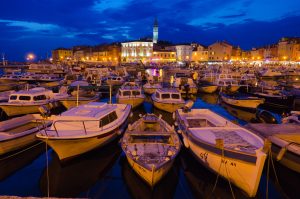 The Region of Rovinj was inhabited since the prehistoric period. There are more than 50 hill-fort fortifications on this territory among which the most famous is surely Monkodonja- a settlement of 50.000m2 which was inhabited by about 1000 people and it was divided into Upper and Lower Town. The findings show that life was present here from the 18th until the 12th century B.C.
Maklavun was built during the Bronze Age. It is a tumulus and the first solar observatory on the Croatian territory. Its 4000 years old building attracts leading experts in the field of astronomy.

During the reign of Histrians, ancient tribe of dangerous pirates, the area experienced a period of prosperity which lasted until their defeat by the Roman Empire. Under their reign, inhabitants lived in peace until year 476 when Visigoths, Huns, Goths and Byzantines started attacking and therefore forcing the population to move on the nearby islands Mons Albanus, St. Catherine, St.Andrew and Cissa.
After Byzantium, Rovinj fell under the authority of the Lombards and then under Frankish rule. Castrum Rubini, located in the area of today’s St.Euphemia’s church, became Ruvigno and survived devastating attacks from both land and sea by the Slavs, pirates from the Neretva river, and Saracens.

The first mention of Rovinj as Castrum Rubini was found in the „Cosmographia“ written by an anonymous inhabitant of Ravenna. From the 9th to the 2nd century, the area was full of disturbances. In that period ,Venice became stronger and, after a long time of resistance, in 1283 Rovinj fell under its authority. In the Venetian period, Rovinj evolved into a strong fishing, shipbuilding and maritime centre, especially in the 17th and 18th century when it became the primary naval city in the whole of Istria. In that period, the city walls were firmed, the city started to expand on the mainland causing the backfilling of the channel between island and the land, creating the Rovinj peninsula.

After the fall of Venetia, citizens of Rovinj took the city government and managed to keep it during the Austrian and French administrations when the progress of industry and the urban development began. Until second half of 19th century, Rovinj was the largest port on the Western coast of Istria. In 1918, Rovinj was occupied by the Italian forces and from 1920 the city was under Italian rule. After Italy’s capitulation in the 1943, Rovinj joined the resistance of Croatians in Istria to become part of Yugoslavia in 1947 and finally, in 1991, the part of the independent Republic of Croatia.